Since writing this post a few days ago, I have received a flurry of questions about strewing- what it is and how I do it. I guess my definition would be placing potential objects of interest in strategic areas around the house with the hopes of inspiring learning. So I guess that answers what it is.

Here’s how I incorporate this method… Before we started unschooling, I used to keep all of the children’s toys in their bedrooms to help keep our living area clean. This helped with our downstairs being readily fit for company at a moment’s notice, but it caused a problem. Our children rarely spend time in their rooms. They spend a good 90% of their waking moments almost literally at my feet- even the older ones. I’m certainly not going to complain about them wanting to spend time with me because, let’s face it, a lot of children don’t want anything to do with Mom and Dad. While I didn’t think about this much while we were homeschooling because I always kept them busy with all sorts of projects, this really posed a problem when we began unschooling. They didn’t want to be upstairs, but there was nothing left for them to do downstairs. This may have contributed to some of the blank stares I used to get when we first started this method of learning. So, obviously, the solution has been to keep most of their activities downstairs.

Obviously, this makes for a much messier house, and, therefore, more frequent bouts of straightening, but it has been so worth it. Toys that sat around for months are now being played with, and, honestly, it’s much easier for me to keep track of puzzles and games when they’re where I can see them.

Although keeping the toys (I keep referring to toys- remember, children learn through play, so don’t discount them as learning resources.) out and in full view has worked wonders, it’s sometimes not enough. You know how after you walk past something a hundred times you kind of just start to ignore it? That happens here, too. So what I’ve started doing is pulling out a few items everyday and placing them on our dining room table. I don’t call attention to them. They’re just there. Sometimes I’ll lay out a few puzzles, some freaky facts science books, crayons, and paper. The other day I found some US states cards, so I put them on the table with an atlas and some blank maps. Somedays they’ll get used; other days they won’t, and that is fine. My goal is to remind them that it’s there, and sometimes that is enough because a week later, I’ll find them playing with said toy. Some days my strewing items are a hit. Today I gave the kids a plastic bin filled with foam sheets, foam shapes, glitter glue, and crayons. That kept them quiet for quite a while. I also pulled out our solar system model that comes with an interactive tablet today. I found Luke(5) listening intently to the narrator this morning, and today at bedtime, I was reading The Magic School Bus book to Bailey about our solar system, and he was able to answer the questions correctly…and it wasn’t because I ever taught it to him.

Now sometimes we may have valuable resources that can’t really be strewn, so it’s important to get creative. For example, we just replaced our chalkboard with a white board today. The kids didn’t really take much notice to it because we’ve had the chalkboard for years, and they had started to ignore it. I really thought this could be a great way for the children to write and have fun at the same time, so all I did was this…

I wrote on it. That’s it, and believe it or not, that was enough. What I had hoped would be used for some writing practice turned into this… 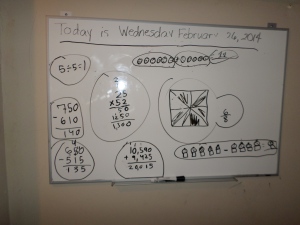 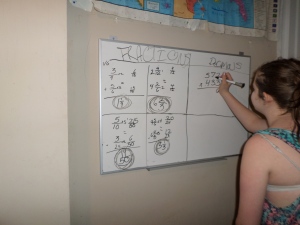 Now please keep in mind that these are girls who hate math! I was happy as a lark when I saw them initiating math on their own.

Another pleasant surprise came later on. Bailey asked if he could go on Paint on my computer, so I said yes. I thought he was going to draw. A little while later I went to make sure he wasn’t destroying my laptop, and I found him typing the words from a book that I had unintentionally set on my computer desk.

Perhaps the most important thing to remember about strewing, though, is that it is not meant to force a child to use the chosen activities. Think of it more as just giving your child an idea…maybe for now, maybe for the future, and maybe never. That’s okay. Speaking from experience, I know that the more you push a child into doing something- no matter how you sugar-coat it- the less they will want to do it. Another important thing is not to separate school from life. I’ve actually stopped referring to it as school because it’s so much more than that. It’s living intentionally.

Do you have any other strewing ideas? I’d love to read some new ones!

Ever wondered just what those unschoolers do all day? Sleeping in late, watching TV, playing a computer game and then counting it as a school day? Apparently, this is the view many people take on this method of homeschooling. But is that all there is to it?

While all of these activities do take place at our house (okay, I don’t get to sleep in :(), this is not an accurate picture of what we do. Today I’m going to discuss exactly that.

Firstly, the role of an unschooling mom is different than that of a school-at-home mom. Neither one is more important or involved than the other. They are just different. Instead of acting as a teacher as a more traditional homeschool mom, my role is as a facilitator. I am there to answer questions, provide a stimulating environment, and introduce, but not force, new concepts.

Another misconception about unschooling is that the parent has absolutely no involvement in the child’s learning activities. I don’t know about other families, but in our home this couldn’t be further from the truth! Are there things that I think my children would benefit from learning? Absolutely. But I am not going to compromise my children’s love of learning by making them do anything.

Speaking from my own high school experience, I can tell you that I really don’t remember anything from the required subjects that I had no interest in. Was I a lousy student? Actually, I was quite the opposite. I was a gifted/advanced placement student who graduated in the top 10% of my class. So obviously, I did learn lots of things…but after exams were over, it was like I opened a valve in my brain and let out all the information that I deemed as unnecessary. I have, however, retained all of the useful information from the classes I chose to be in.

This is exactly why I’m approaching my children’s education differently. As I mentioned before, while there are things I’d like to introduce to my kids, I will not force anything on them. So how do I do it? There are two methods I use that seem to work nicely.

– Strewing. Everyday I set different books and activities around the house that I think may interest my children. Today, I pulled out Ripley’s Believe It or Not and Guinness Book of World Records books and laid them on the table. I also pulled out some paper and giant coloring books. Did everything get used today? No, but that’s okay. They have seen it and know that we have it. Oftentimes they will go looking for it at a future time.

Today was a great example of that. My kids kept themselves busy all day with items I had strewn last week even though they had no interest in them when I laid them out. Dillon spent two hours putting together a WoW lego set, Luke and Ireland played with clay for a long time, and Bailey spent quite a bit of time drawing, coloring, and then cutting out animals. Arianna painted for a while, and Caollin and London used some stuffed animals to play “crane machine.” (Their latest obsession since Daddy won them all animals out of a crane machine at Denny’s Diner last Saturday) Just because you introduce something to a child does not mean they’re going to be interested. Be patient. They’ll learn about it when they’re ready.

Another way I engage my children is…

– Family read-aloud time. I am very intentional about the books I choose to read to everyone. If there is a concept or a time period I think they would enjoy, I’ll look for a corresponding book. Over the summer we read Little House in the Big Woods. I can’t even begin to tell you about the flurry of activity that that started. I would find my kids outside everyday playing Little House. They dressed in pioneerish clothing, made their own “little house” with pieces of wood we had lying around the yard, and I could hear them discussing things like churning butter and making salt pork. They were interested, so they learned! We just finished Little House on the Prairie, which also brought some wonderful rabbit trails to our home. Today I started reading The Odyssey to them. I can’t wait to see what springs from this because we all love Greek mythology.

Hopefully, I’ve put to rest the idea that unschoolers, particularly unschooling parents, are lazy and uninvolved. We are just as involved and passionate about learning as other moms. We just do it in a different way.

How do you introduce new concepts to your children?